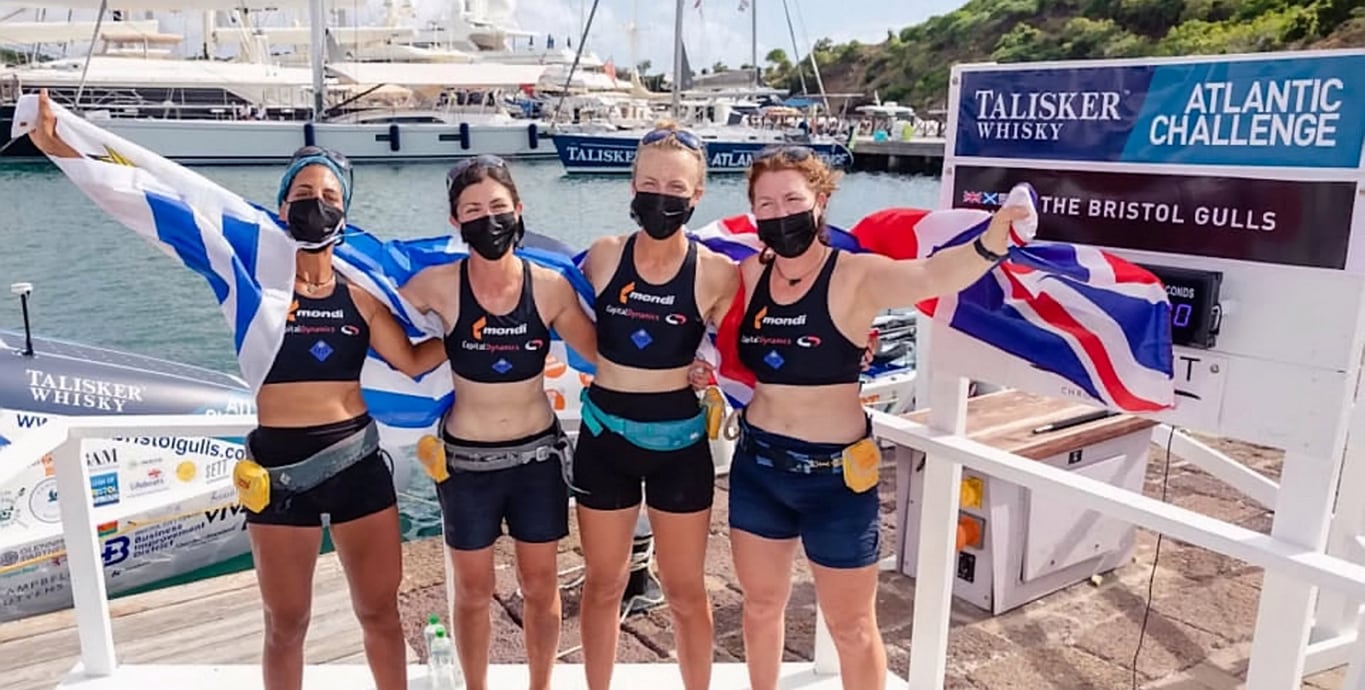 Hear what they had to say when Chris spoke to Phoebe:

Who raised the idea initially and are the 4 Gulls the original 4 – or were others onboard initially?

Sofia and Lorna attended a talk in early 2018 about the Talisker Whiskey Atlantic Challenge and were instantly hooked on the idea! As a combination of rowing and adventure they couldn’t think of a more exciting venture to undertake.The two of them set out to find a team and get the ball rolling but had a few setbacks along the way and the original team didn’t work out. So Sarah joined Lorna and Sofia in late 2019 and I (Phoebe) was the last addition, joining with just a few months to go in August 2020.

Approx how long did you spend planning for the event when you consider sponsorship/social media/training programs etc?

The Bristol Gulls signed up for the event more than two years beforehand and hundreds of hours were spent preparing for the row.  Planning for the Atlantic row was our 5-9 job! It took up almost all of our free time; mornings before work were spent training physically and then afterwork we would all dedicate time to fundraising, finding sponsorship, sourcing equipment, undertaking navigation and other essential courses, talking team tactics….. Before we set off, past ocean rowers had told us that getting to the start line was the hardest part of the whole thing, and I think we’d agree!!

How did you find training with all the lockdown conditions, did it feel like it impacted your preparations at all?

It wasn’t easy and 2020 was certainly a year of adversity! Lockdown restrictions meant we were unable to collect our boat until July which left us with limited time to train together on the water and familiarise ourselves with the onboard equipment and boat. Gyms being closed also meant we all had to get creative with our training plan and adapt to the limited equipment we could access!

We mainly trained with kettlebells and resistance bands in our living rooms, and linked up virtually to do team training sessions! There was also a time when we were worried the whole event would be cancelled due to global restrictions! Overall, I think the adversity we faced made us a stronger team!

What were the really low points of the race and how did you tackle that to keep going so well?

There are a few occasions that stand out as low points. Seasickness in the first week, scorching heat and sea that was like treacle to row through, team disagreements, rainstorms and unfavourable winds and waves all caused low moods on board! We also had a capsize which was a scary experience! We lost a fair amount of food, one of our oars and our seat cushions! We were extremely lucky that none of us were injured or the boat damaged, but it was frightening none the less to feel the full force of the ocean!

We all worked to stay positive despite what came our way during the crossing and I think that this positive demeanour, combined with humour and optimism enabled us to keep going day after day! We also had the names of our families, closest friends and biggest supporters written on the cabin walls, so each day had a regular reminder of how many people had helped us get to where we were and a reminder of their constant support.

What was the most memorable experience (if you had to choose one moment from the trip)?

That’s a hard question as there were so many…and I would say arriving in Antigua is up there at the top! But the night we had a pod of orcas surrounding us is an experience I will never forget! It was a dark night and an inquisitive pod came and circled us for a while. We could hear the whales communicating with each other, and the water around them glowed with bioluminescence. It was a phenomenal experience to be so close to such incredible wildlife and also feel so vulnerable, knowing we were on a 8m boat, in water that was 5 miles deep, hundreds of miles from other people.

Do you have any recommendations for anyone who might be contemplating entering the race?

If you are thinking about it and the idea of rowing across an ocean is something that appeals to you… then go for it! What are you waiting for?! It is a huge undertaking and you have to be 100% committed to the campaign as it’s all-encompassing, but all of the hours of planning and endless time spent training and getting ready is definitely worth it for the experiences you will have on the ocean and the feeling of elation when you complete the journey.

Obvious one…Would you do it again?!

We all have slightly different answers and although most of us agree that we probably wouldn’t do the Atlantic race again, we have all said that we’d like to do another ocean or coastal row! The experience of being at sea is so incredibly special and humbling that I think we’d all leap at the chance to do it again.

It’s not too late to donate!

The Bristol Gulls took on this challenge to raise money for the RNLI. The RNLI as a charity depends on our donations to continue to offer life saving services to anyone at sea. You can still donate via the Gull’s Just Giving page.